McMaster University recognizes that the University and surrounding Hamilton area, including their nature spaces, are situated on traditional territories shared between the Haudenosaunee confederacy and Anishnaabe nations. These lands are protected by the Dish with One Spoon Wampum belt. The wampum uses the symbolism of a dish to represent the territory, and one spoon to represent that the people are to share the resources of the land and only take what they need.

The City of Hamilton is situated in one of Canada’s most vibrant and rapidly diversifying urban landscapes, which is renowned for its waterfalls and views of the Niagara Escarpment. This unique geography offers a natural playground for anyone looking to get outdoors. Hamilton offers a rich variety of cycling, hiking, horse-back riding, and boating opportunities, and many more ways to become involved in the active Hamilton community.

Stemming from the steep ridges of the Niagara Escarpment, Hamilton’s landscape is home to a variety of different geological gems to be discovered. Found in this guide is information concerning three of the Hamilton communities major geological features to keep an eye out for when enjoying the great outdoors. Such areas include the Niagara Escarpment, Hamilton’s many natural waterfalls, and karst features. 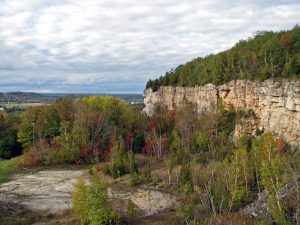 Hamilton is known for its variety of geological formations, the most evident being the Niagara Escarpment. Locally, this rocky ridge is known as the Hamilton Mountain: a vast region of elevated land in Hamilton that cuts through the city and surrounds the neighbouring Stoney Creek and Dundas Valley. The escarpment contains some of the best exposures of rocks and fossils that date back 400-500 million years and is classified by the United Nations Educational, Scientific and Cultural Organization (UNESCO) as a World Biosphere Reserve. Such designation recognizes the Escarpment as an internationally significant landform valued as both a representative and scientific example of a sustainable relationship between humans and complex ecosystems. The Niagara Escarpment holds significance as one of only 18 biosphere reserves recognized in Canada. On a large scale, the portion of the Niagara Escarpment that runs through Canada is 725km long and runs from the tip of Tobermory over to Niagara Falls. Where the Escarpment extends North of Tobermory to Manitoulin Island, it disappears into Lake Huron and eventually reappears in Wisconsin.

Pictured: View of the Niagara Escarpment, Hamilton, ON 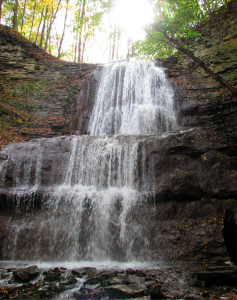 Hamilton is home to over 100 waterfalls and cascades situated along the Niagara Escarpment! The Escarpment itself provides a rocky environment made up of plummeting cliffs and dramatic elevation changes creating a perfect geological environment for waterfalls to occur. Being the Waterfall Capital of the World, there used to be more waterfalls flowing in Hamilton then exist today. However, many were damaged or have slowly vanished as roadways were built and industry moved into the area, paving over natural wetlands and harming the cities natural drainage and the ecology of the Hamilton Harbour.

The waterfalls themselves are each distinctly unique land formations that differ in size and flow. Waterfall accessibility also varies, where one waterfall requires minimal walking on well-groomed trails, another may need an experienced hiker who is willing to trek a longer distance for a perfect view (Be sure to check out the Resource Guide on Trail Accessibility for more information concerning unique accommodation trail features). On a cautionary note, since the Hamilton waterfalls are often along steep drops with loose, rocky debris, slipping hazards are significantly increased. For this reason, it is essential to stick to marked paths and viewing areas when exploring any waterfall in the area. 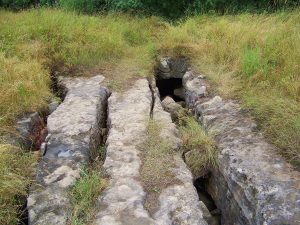 Hamilton is home to the most extensive cave system in Ontario, Eramosa Karst, a geological land formation that features caves, drainage basins, underground rivers and much more! A Karst itself is a landscape formed by the dissolution of water-soluble rocks such as limestone, dolomite, and gypsum. The geological formation of a Karst occurs over thousands of years and involves a process known as ‘Carbon-Dioxide Cascade’ where carbon-dioxide-rich rainwater falls and collects in the soil. Over time, as the amount of carbon-dioxide builds in the soil, it forms a weak solution of carbonic acid that will begin to dissolve and erode away at the surrounding rock. Eventually, these cracks and crevices with grow into drainage systems, saves, sinkholes, and other identifiable Karst features.

Visit Geology Ontario, or any other links found in the sidebar, for more information concerning these geological feature and more! 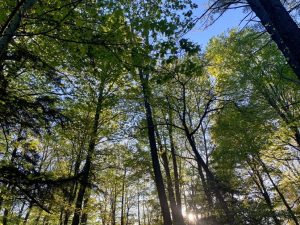 The importance of forests can’t be underestimated. All living things depend on the health and wellness of trees for survival: from the air, we breathe to the books we read, and the houses we build. Beyond what we can see, forests offer watershed protection, prevent soil erosion and even combat climate change. With that in mind, although woods permeate every facet of life on earth, they are slowly diminishing and disappearing. Luckily, Hamilton is home to a unique forest system that offers lots to see, discover and admire. Included here is more information about Hamilton’s forests and fun facts about forests to keep an eye out for throughout the year. 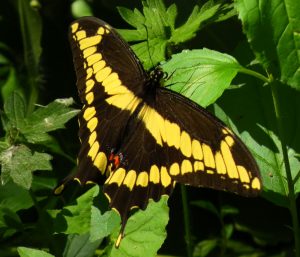 Hamilton is home to a small section of the Carolinian forest that extends from North and South Carolina in the United States to Southern Ontario; a unique ecosystem that occurs nowhere else in Canada and, although making up 1% of Canadian forests, contains a more significant number of plants and animals than any other ecosystem in the country. This region of dense forest is a result of a temperate regional climate, similar to that of North and South Carolina, and allows for the flourishing of flora and fauna typically found in the Southern United States. Examples of such species include Sassafras, Hackberry, Sycamore, Rose Magnolia, Opossums, Gray Foxes, Cardinals and Giant Swallowtail Butterflies.

Leaves in the Forest

Why Leaves are Green – Leaves are green because they contain a pigment called ‘chlorophyll.’ Chlorophyll is responsible for photosynthesis, a word for the process by which a plant’s leaves combine water and carbon dioxide with energy from the sun to make food. Without photosynthesis and the fresh air leaves produce, life on earth could not exist.

Why Leaves Change Colour in the Fall 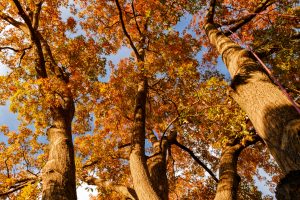 With Autumn comes the change of the Summer green foliage of deciduous trees into a mix of red, purple, orange and yellow; a resulting from a chemical process that takes place within the tree as winter approaches. During the Spring and Summer months, the leaves serve as factories where food and nutrients necessary for tree growth are produced from chlorophyll; a chemical that not only gives leaves their green pigment but absorbs energy from sunlight to transform carbon dioxide and water in carbohydrates. Also contained in the leaves of a tree are yellow and orange pigments (from the chemicals carotenes and xanthophyll) that are masked and overwhelmed by the abundance of green chlorophyll. However, in the fall, because of a change in temperature and a decrease in daylight hours, leaves stop their food-making process. Therefore, as the chlorophyll begins to break down the typically green hue is replaced by other colours.

As the fall colours begin to appear in the forest canopy, other changes are also taking place! For instance, at the point where the stem of the leaf meets the branch, a build-up of cells develops and eventually breaks the tissues attaching the leaf to the tree. The tree simultaneously seals the break so that when the blade finally falls from the tree, it leaves behind a small scar. Most broad-leaved trees in Ontario shed their leaves during the fall. The exception is trees like Oaks whose dead brown leaves will remain on the tree until the Spring growth begins.

Stratification – In forests, green leaves characteristically grow in vertical layers, a pattern known as ‘stratification.’ The leaves of the tallest trees form a ‘canopy’ with all the trees below called the ‘understory:’ a layer consisting of much smaller tree species such as Flowering Dogwood or Sassafras. In most forests, below the understory, there is often another layer called a ‘shrub layer’ that includes bushes while the lowest layer, the ‘herb layer,’ made of flowers and low lying plants, is the final layer of the forest ecosystem. The herb layer is best seen in the spring months when many wildflowers are in bloom. Upon the soil, itself is the ‘litter layer’ of decomposing leaves and wood. Fully mature forests typically display clear stratification, while this may be harder to identify in young forests. In Spring, stratification of the forest happens from the bottom up with flowers and grasses being the first to pop up followed by ferns and shrubs like skunk-cabbage.

For more information on Hamilton forests, check out a copy of Petersons’ Ecology of Eastern Forests from your local library or click any related links found in the sidebar. 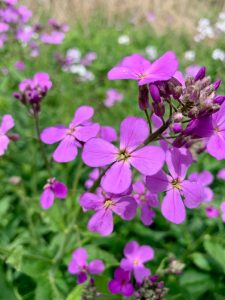 Invasive species are one of the most prominent threats to the biodiversity of Hamilton’s forests and water. Originating from foreign regions or other ecosystems in the world, invasive species can have a devastating effect on the environment without the regular checks and balances of its native habitat. Hamilton has various invasive species that are threatening its natural ecosystems and include both flora and fauna. Such species include Buckthorn trees, Phragmites, Carp, Emerald Ash Borer Beetles, Garlic Mustard Plants, Dame’s Rocket and various others.